A turned-mold blown, art-object / dish, model 3320. Designed by Tapio Wirkkala in 1966 and executed by the Iittala glassworks in Neosin coloured glass between 1966 and 1969.

This art object is model 3320 in the oeuvre of the Finnish master and was released in serial production in two sizes, namely 12,5 and 22,5 cm in diameter. This being a largest sized example. 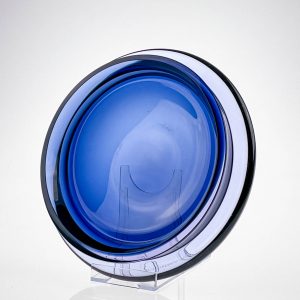