A fixed mould blown, cased glass art-object “, model KF304, in green and brown coloured glass. Designed by Kaj Franck in 1966 and executed by the Nuutajärvi-Notsjö glassworks, Finland circa 1967.

It is marked underneath the base: Nuutajärvi-Notsjö. In accordance with Kaj Franck’s ideas regarding the role of the artist in the creative process, his designs were – from mid-1960’s to the late 1970’s – signed with the factory name only . 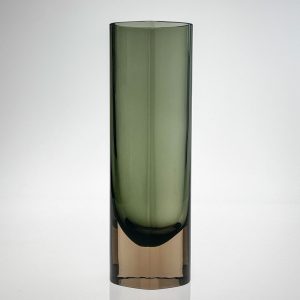