Freeblown and flared clear / opaque  artglass objects, model KF106. Designed by Kaj Franck in 1951 and executed by the Nuutajärvi-Notsjö glassworks in 1950’s.

They are both signed. One is acid signed and the other is signed and dated in diamondpen underneath the base. 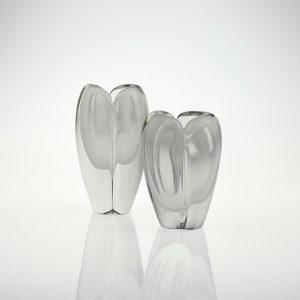