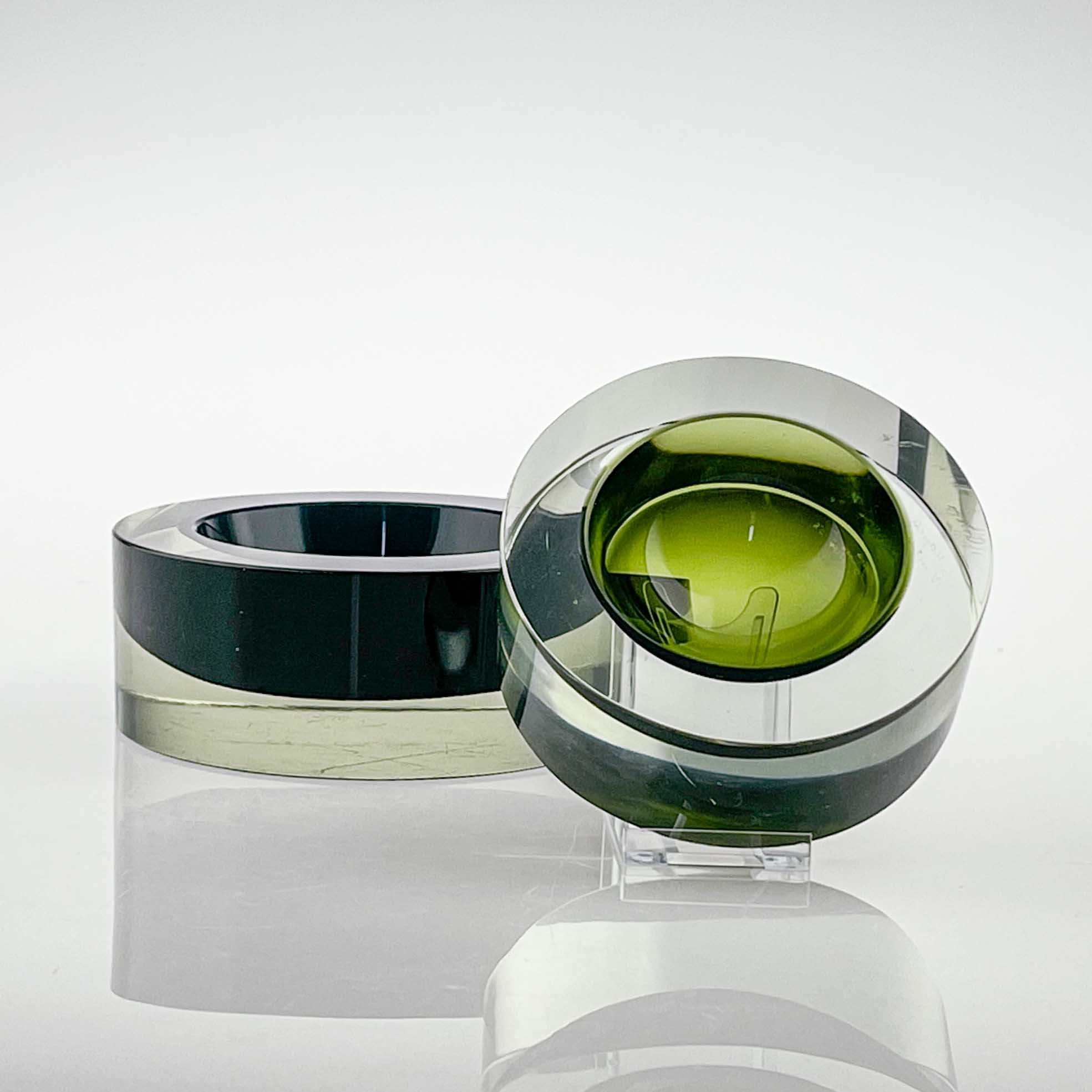 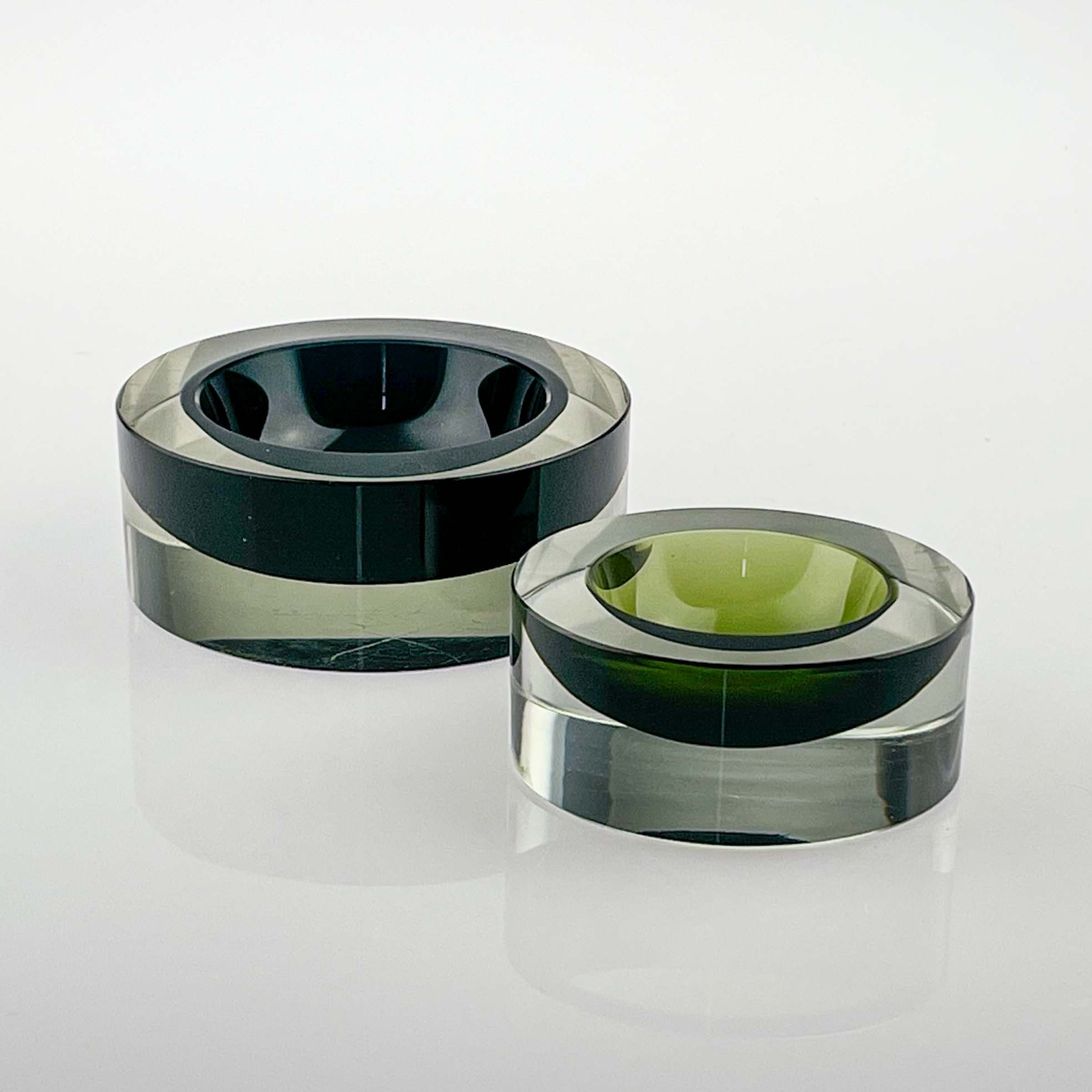 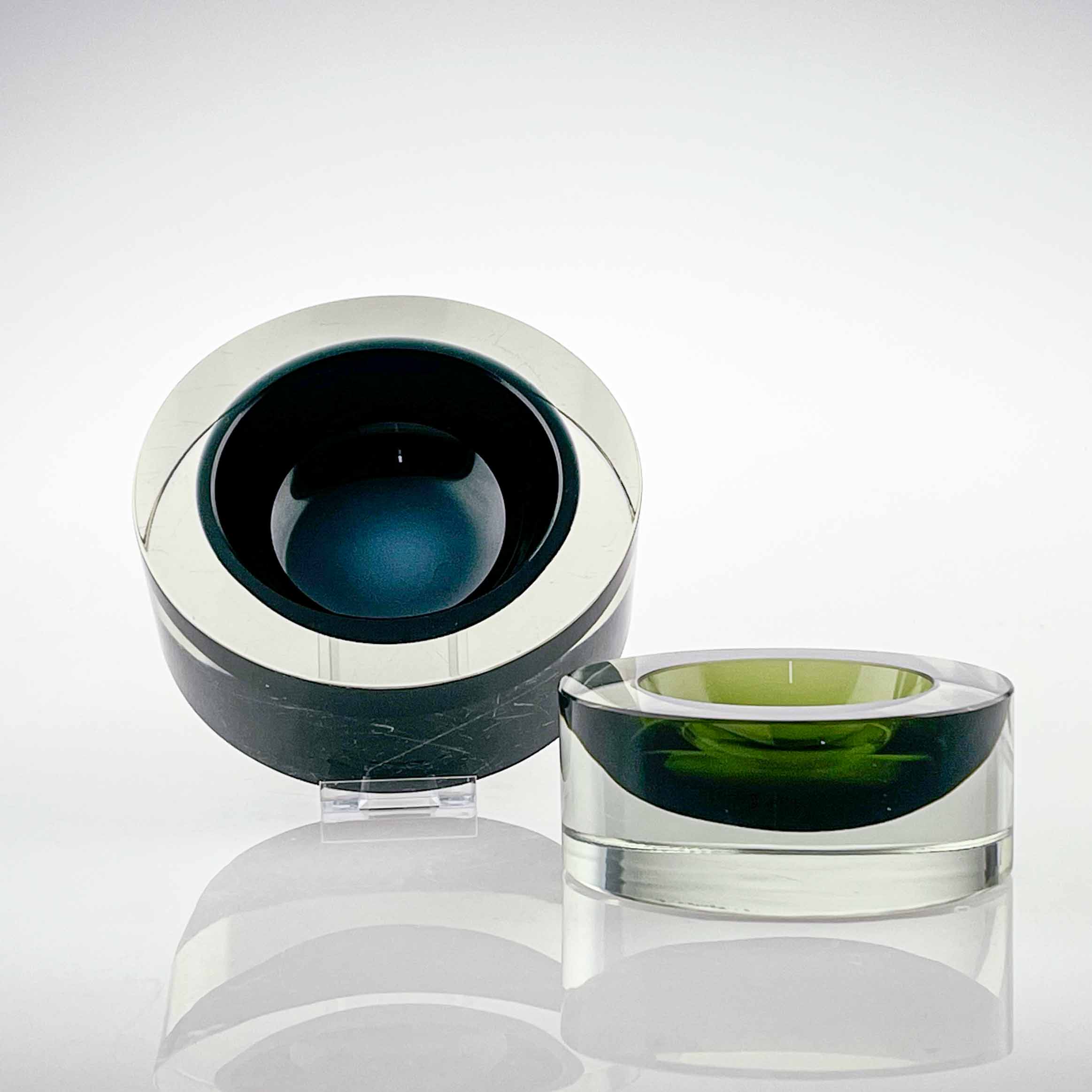 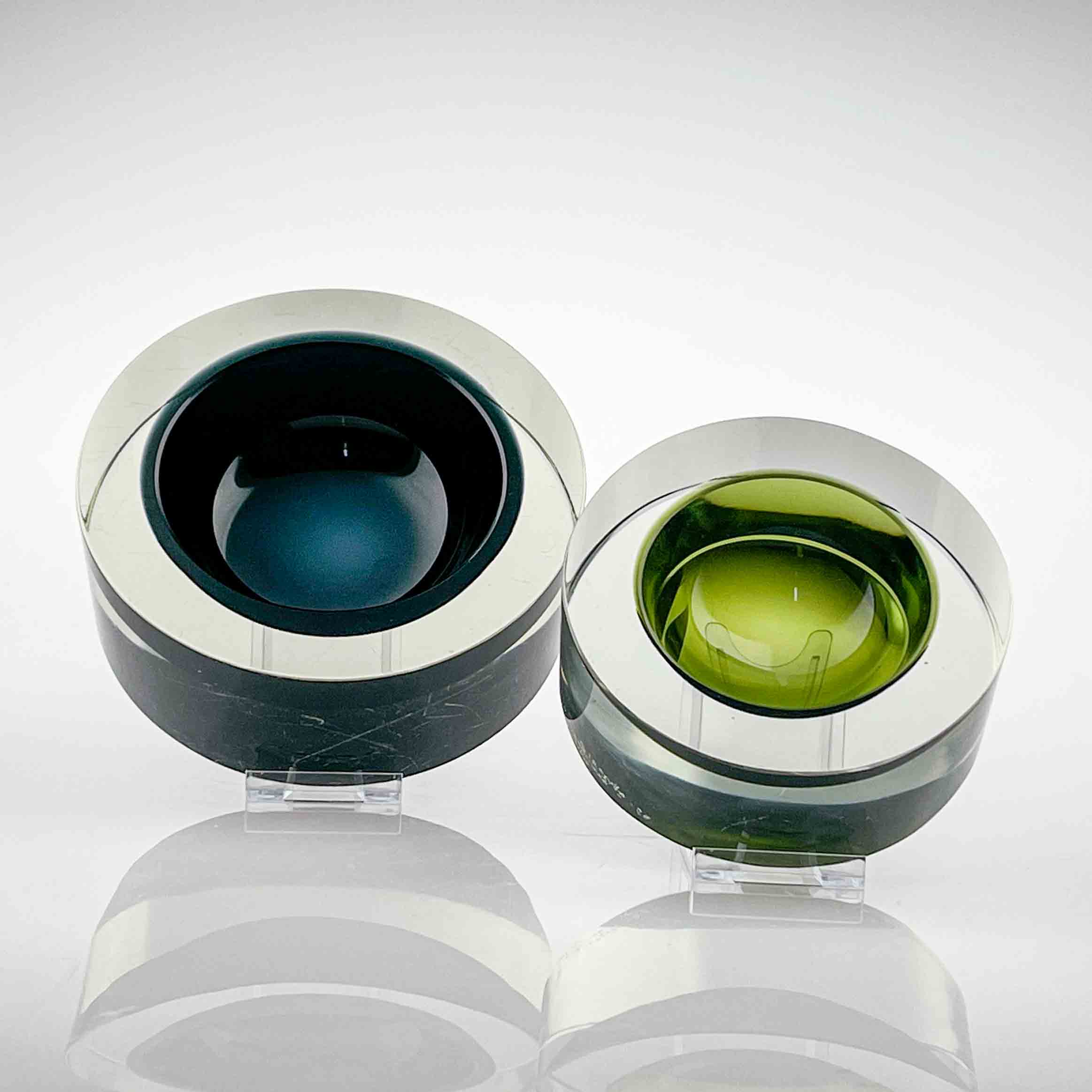 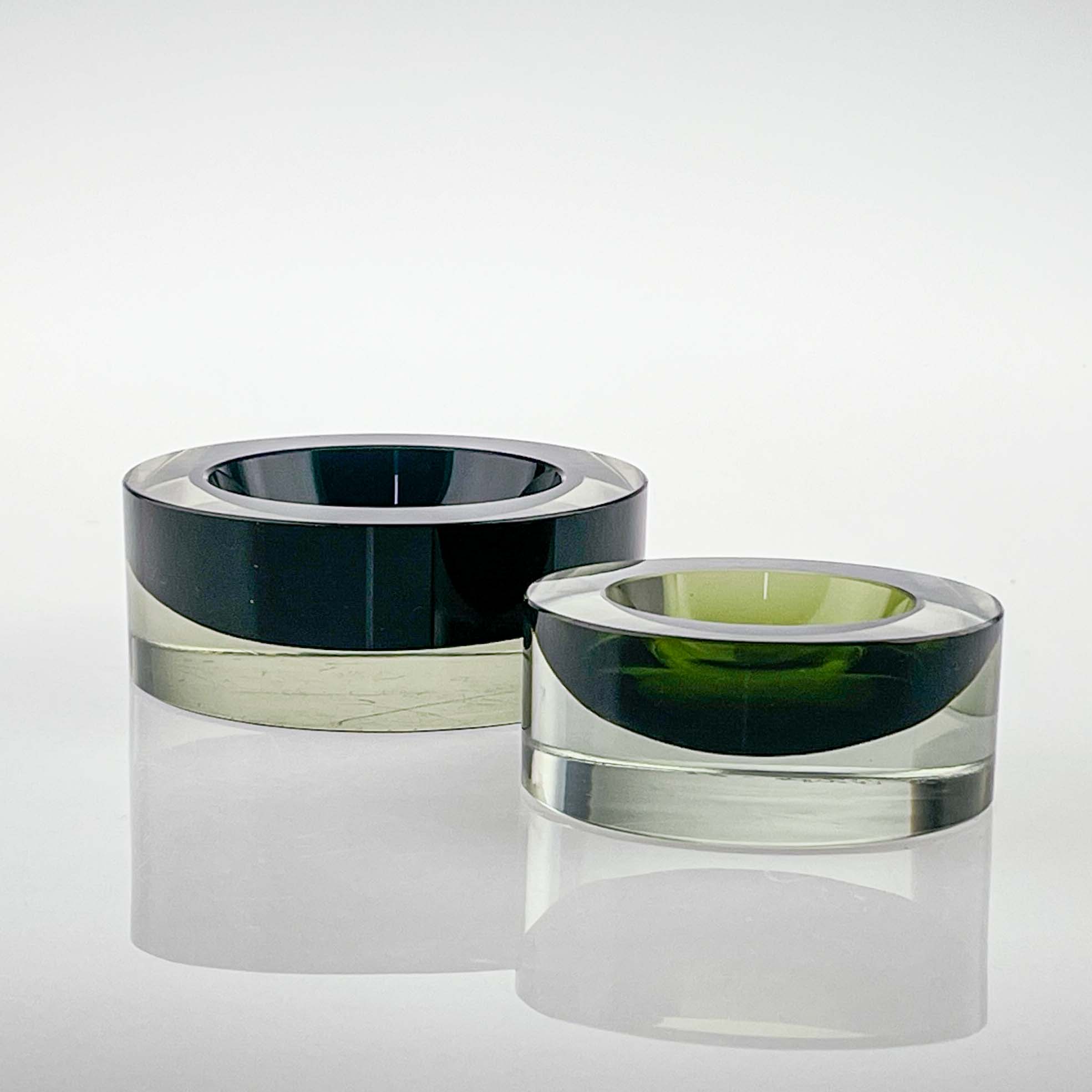 An optical effect makes it appear as if the colour goes to the outer edges but the encasing is only in the interior.

These objects were made between 1956 and 1967 in two sizes 9,5 cm and 13,5 cm in diameter, and in several colours (blue, green, yellow, purple and red) this being a complete set in green and blue. Both are early production examples.

They are marked and dated in diamond pen underneath the base.

Saara Hopea was born in 1925 in Porvoo, in the south of Finland. Her parents Ossian Hopea and Lempi Westerlund owned a goldsmithing company.

She graduated in 1946, and worked for a few years as an illustrator, then she accepted a job at the lighting factory of Taito Oy, headed by the renowned designer Paavo Tynell.

In the early 1950's, Saara Hopea became interested in glass design and started working at the Nuutajärvi glass factory, where she worked under artistic director Kaj Franck.

After her father's death, Saara Hopea took over the direction of the family business Ossian Hopea Oy in 1959. She worked as the artistic director from 1959 to 1960 and again from 1967 and was responsible for numerous jewellery designs.

In 1960 Saara Hopea married Oppi Untracht , an American goldsmith, photographer and writer, and they moved to New York City. Together with her husband, Saara Hopea also lived in Nepal and in India over the years until 1967, after which the couple settled permanently in Porvoo.

For her glass designs, Saara Hopea received a silver medal at the Milan Triennials in both 1954 and 1957. She also received the Porvoo City Culture Prize in 1981 and the State Arts and Crafts Prize in 1982.

Her retrospective exhibition was held at the Museum of Arts and Crafts in Helsinki in 1987. 28 of her works are in the collection of The British Museum in London and the MoMa in New York holds 11 of her works. 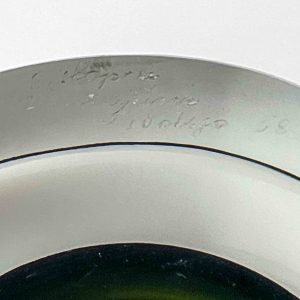 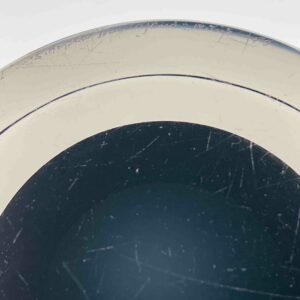 These Art-objects are in good vintage condition. Some scratches on the side and several deeper scratches underneath the base. Basic wear consistent with age and use. No chips or cracks.