The airbubble was created by sticking a wet wooden stick into the hot glass. The water on the wood evaporated and created the bubble.

This art-object was introduced during the Milan Triennale in 1954 and was produced in two sizes (14 cm and 17,5 cm) by the Finish glassworks Iittala between 1954 and 1960. 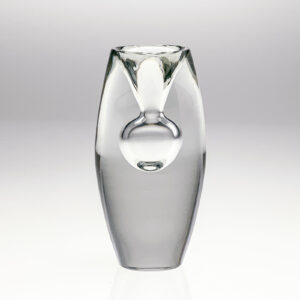