A polished and lacquered brass pendant, model “Casablanca’ or “Kassablanka”. Designed in 1964 by Simon Henningsen and executed by Lyfa, Denmark circa 1970.

The lamp consists of four brass interlocking cubes with rectangular cutouts. These cutouts were placed in such fashion to only allow indirect light to emerge.

This shiny exterior gave the lamp it’s name. In the Danish language Kassa Blanca means shiny box. The name was also a lighthearted pun on the name of the Moroccan city and Lyfa’s own address at Blanka Road in Copenhagen.

The Casablanca pendant hasn’t been in production for quite some time. It is not dated but stamped, our estimation is that it is probably produced circa 1970.

Son of the famous Danish designer of lighting Poul Henningsen and his first wife Else Strøyberg, Simon Henningsen grew up in the heart of Danish cultural life.

Like his father Simon studied Architecture and like his father he did not finish his education. He worked together with his father on several designs for the Tivoli amusement park in Copenhagen, eventually following in his footsteps as the chief architect in 1948.

As he died at a young age, he was only 54 years old. He occupied himself with lighting designs only for about a decade. His first lamp Simon designed in 1954 and was dubbed the SH lamp, in the 1950’s his lights had more organic forms compared the his designs from the 1960’s.

His two most well known designs were the Divan II, designed for the Divan restaurant in Tivoli and the Casablanca / Kassablanka lamp. Both of these designs were made by Lyfa and were complex and expensive to produce because of the materials and craftmanship used. 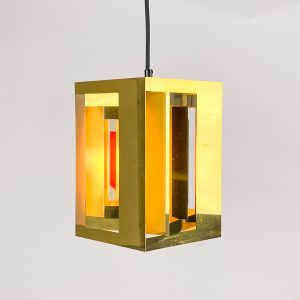