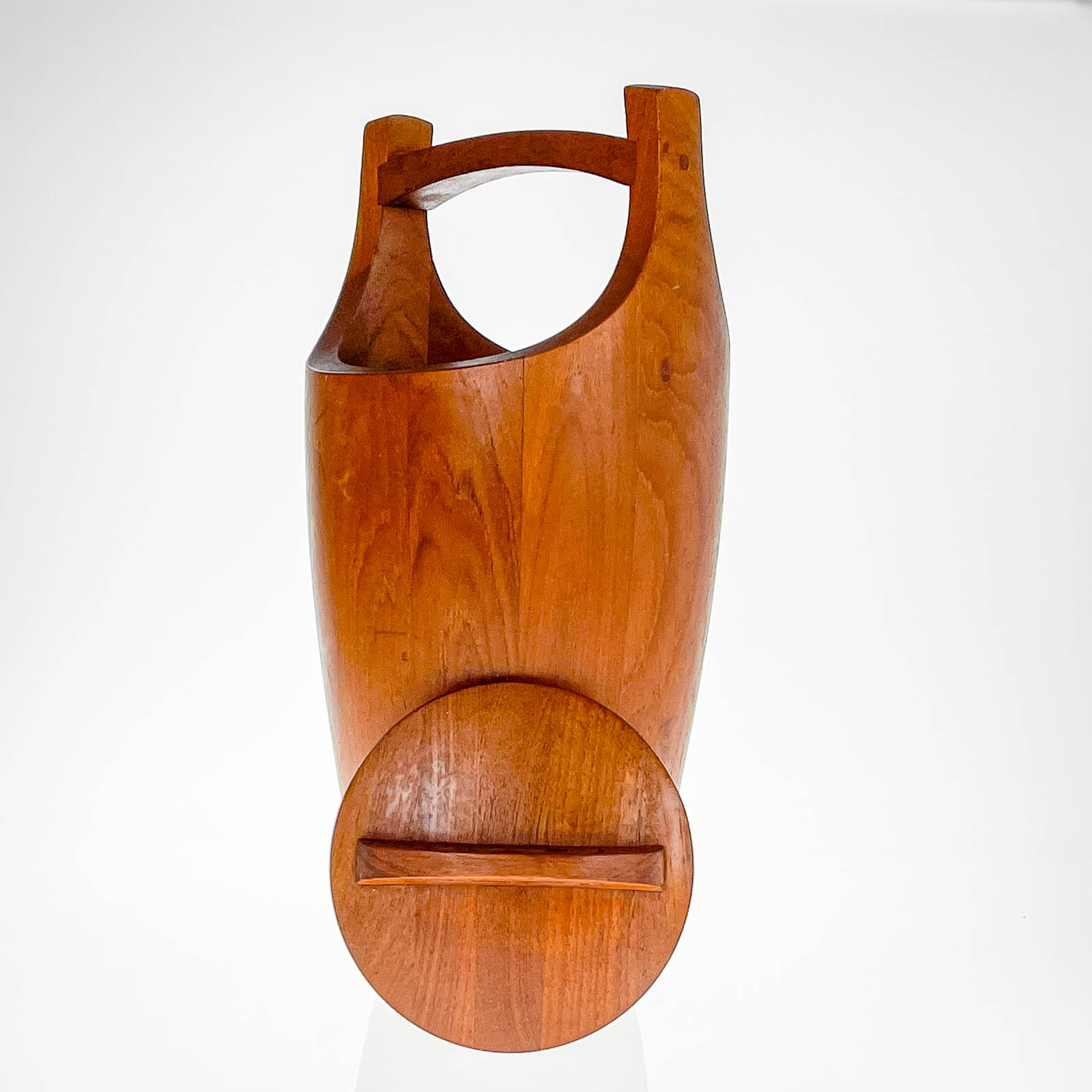 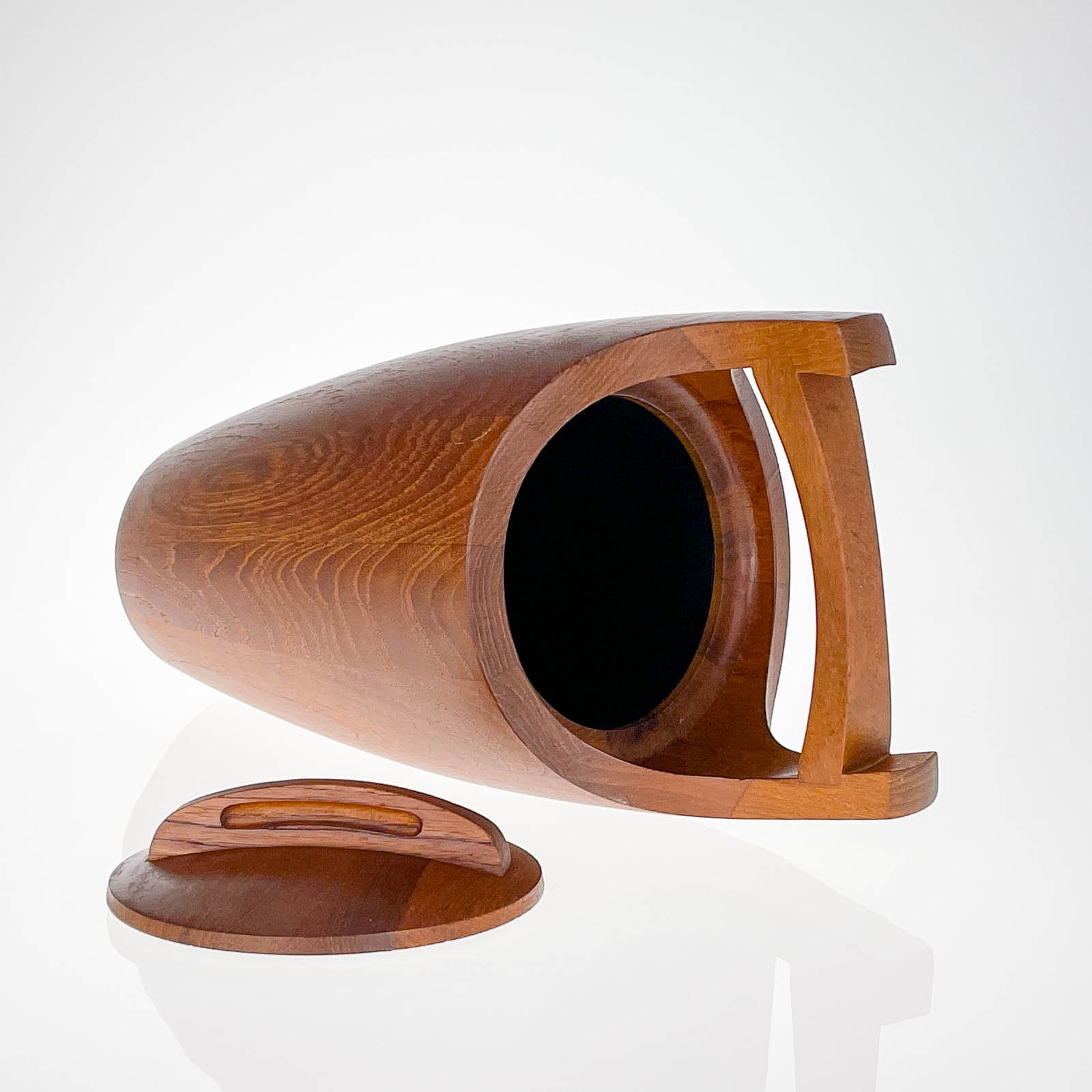 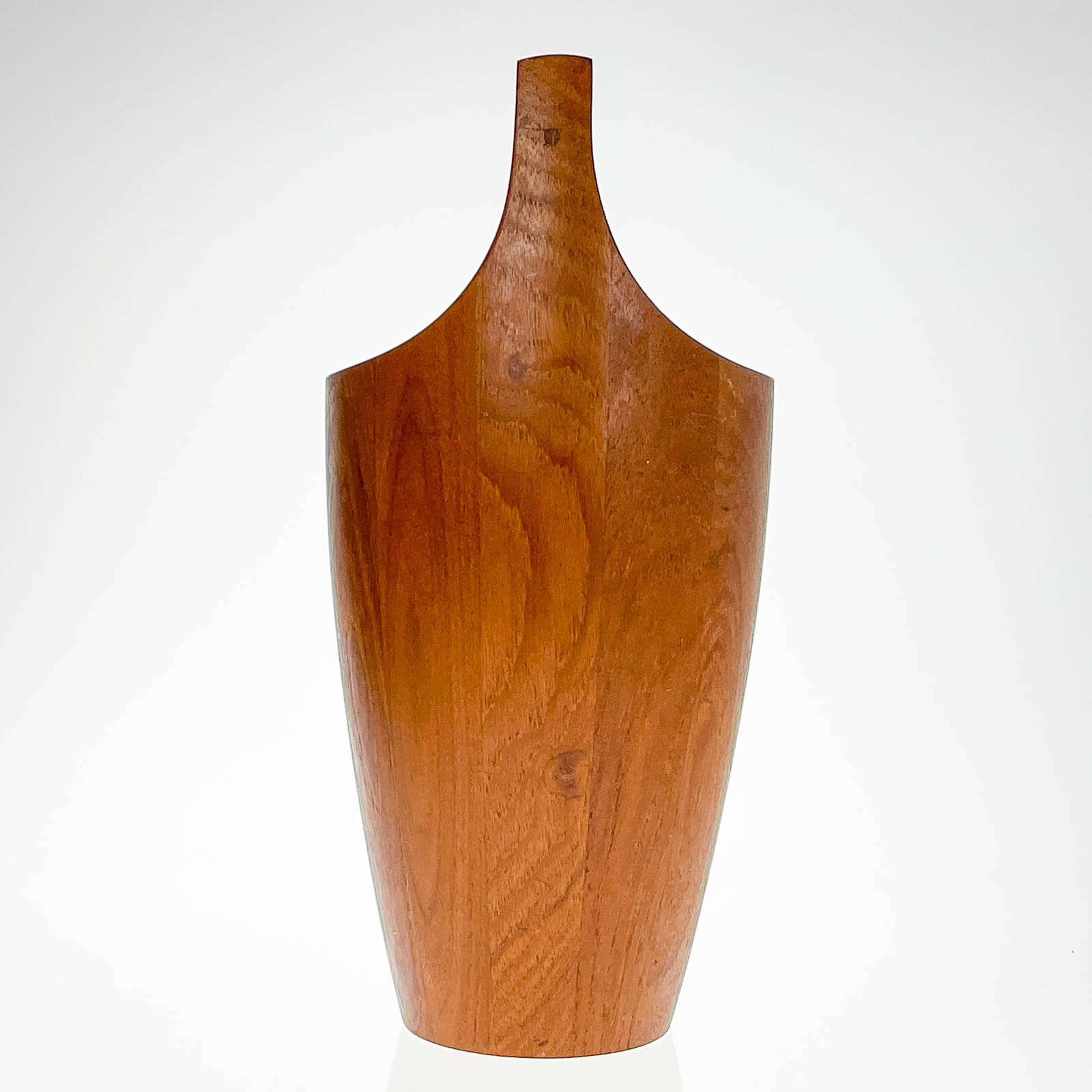 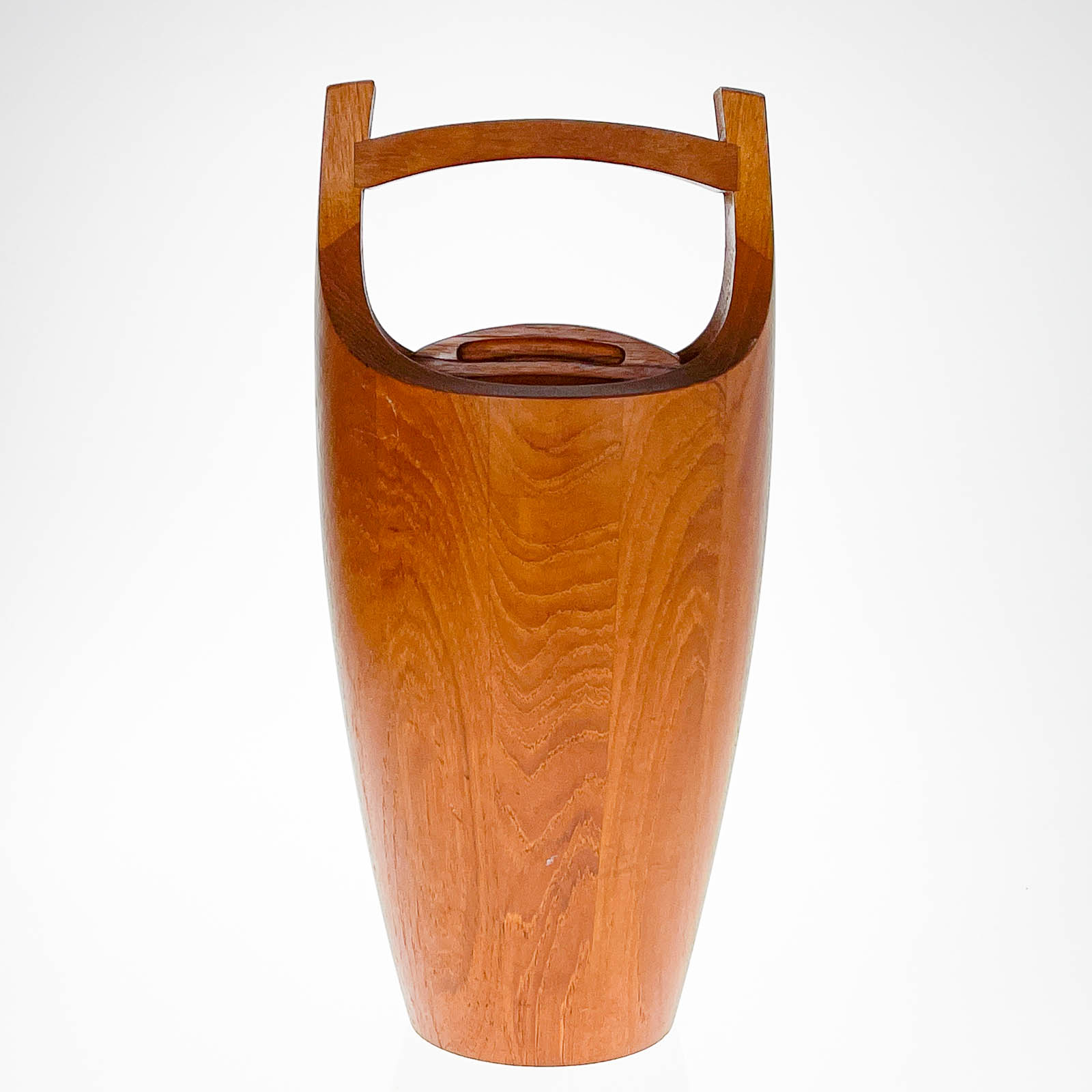 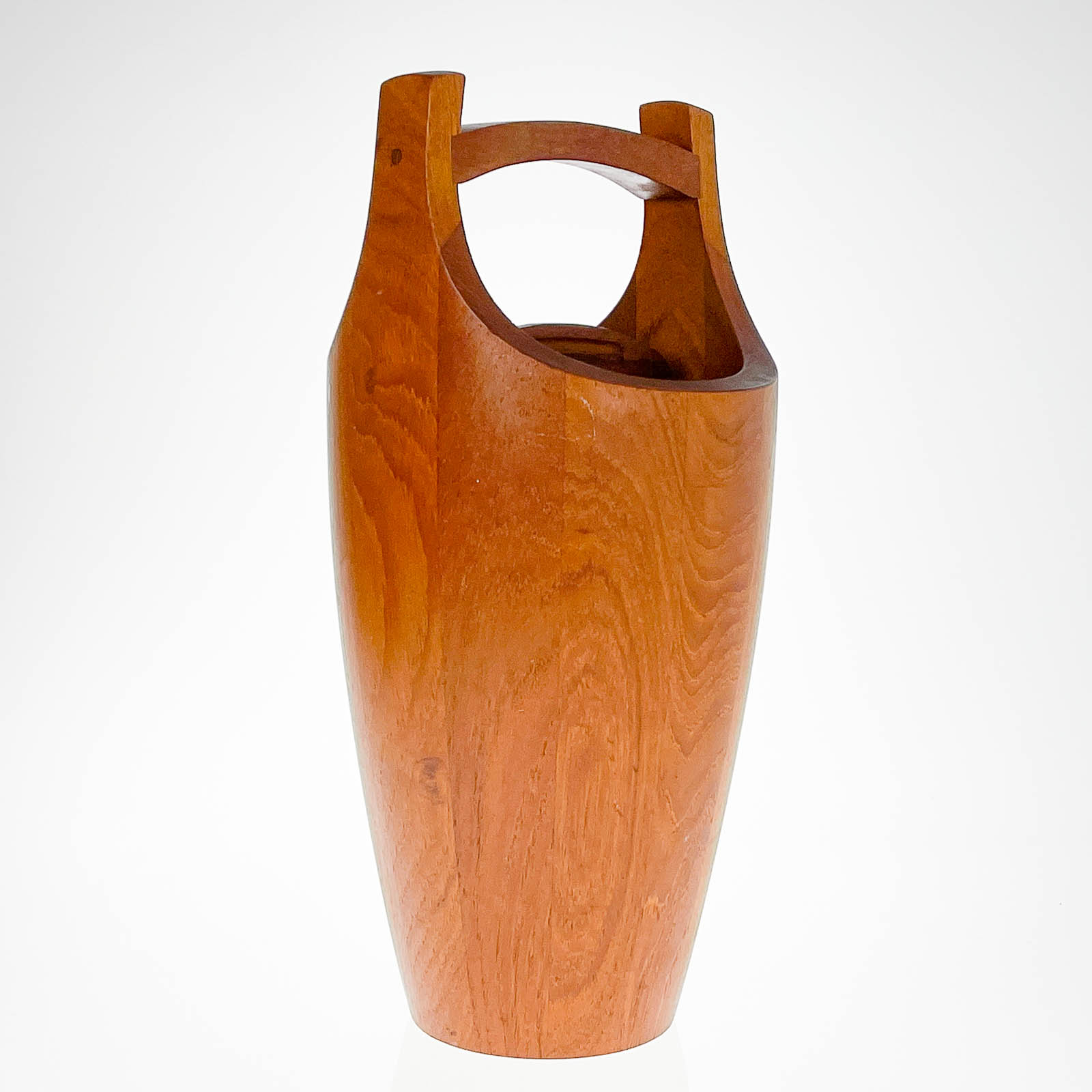 A staved teakwood “Congo” lidded icebucket with a black plastic inner liner. Designed by Jens Quistgaard in 1955 and produced for Dansk Designs probably in the late 1950's or early 1960’s.

These icebuckets were made in three different size ranges, this being a middle sized example. These objects were made with great craftsmanship.

Strips of solid teakwood (staves) were joined together in a traditional way to form the final shape. The craftsmanship originates from the tubing of buckets and barrels and has been practised in Scandinavia since the middle ages.

The ice bucket is branded underneath the base: "four Ducks mark" - which identifies the bucket as an early production piece - Dansk Designs Denmark - JHQ (Jens Harald Quistgaard) and ©.

After World War II Quistgaard set up his own design studio in Copenhagen. His breakthrough as an designer came in 1953–54, where he fashioned the cutlery set Fjord, the first cutlery set that combined stainless steel with handles of teak.

In 1954 was awarded the gold medal at the Triennale in Milan for a saucepan design. For two more reasons 1954 became a very important year for Quistgaard. He received the prestigious Lunning Price – informally called the “Nobel price for design” – and he started to work together with the American businessman Ted Nierenberg.

Together they founded the American company Dansk Designs with Quistgaard as chief designer. His designs were an immediate success in the USA and his designs were synonymous with modern living and Scandinavian style, consisting of clean lines, sculptural form and natural materials.

From the 1960’s onward his success in The united States was followed by success in Europe and Japan. Dansk Designs started their own shop in Copenhagen, in London and in Stockholm, and Quistgaard's designs were exhibited and sold in Tokyo, Berlin, Paris, Zürich, Melbourne, Johannesburg and many other major cities.

Quistgaard remained chief designer for Dansk Designs until the 1980’s. In 1983 he moved to Rome and in 1993 he returned to Denmark.

His work is represented in many museums all over the world, among others: The Louvre, Paris; Designmuseum Danmark, Copenhagen; The British Museum, London; The MoMa, New York City and the National Museum, Stockholm.

made for Dansk Designs in Denmark, circa 1965

Branded underneath the base: 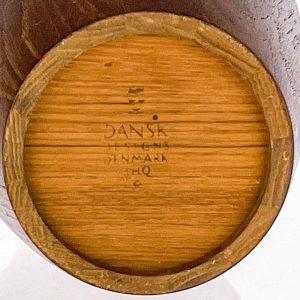 Good original condition, some minor scratches, stains and dents. Wear consistent of age and use.